What to see in Thimphu 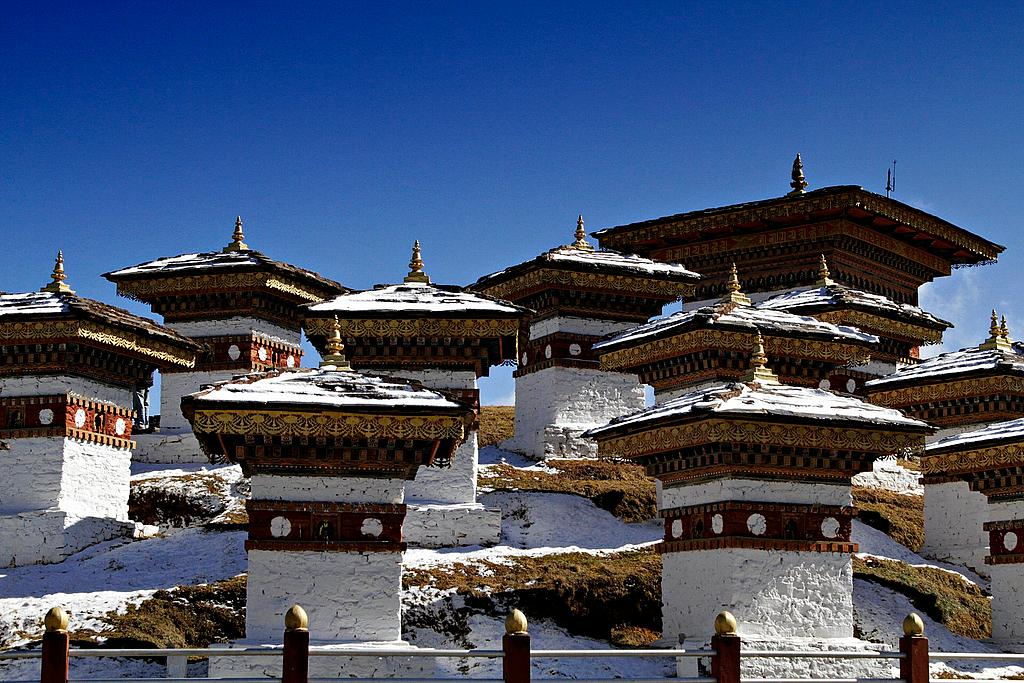 MEMORIAL Chorten/Stupa: This stupa was built in 1974 in the memory of Bhutan’s third King, His Late Majesty, King Jigme Dorji Wangchuck, who is popularly regarded as the Father of Modern Bhutan. The paintings and statues inside the monument provide a deep insight into Buddhist philosophy.

TASHICHHO Dzong: Also known as ” fortress of the glorious religion”, the Dzong was initially erected in 1641 and rebuilt by King Jigme Dorji Wangchuck in 1965. Tashichhodzong houses the main secretariat building and the central monk body. It is open to visitors during Thimphu Tshechu and when the monk body moves to warmer Punakha in the winter months.

SEMTOKHA Dzong: Five miles from Thimphu, on a lofty ridge stands Simtokha Dzong, built in 1627 by Shabdrung Ngawang Namgyal. The oldest fortress of the Kingdom, it now houses the School for Buddhist studies.

NATIONAL Library: The history of Bhutan lies imprinted in archaic texts which are preserved at the National Library. Besides thousands of manuscripts and ancient texts, the library also has modern academic books and printing blocks for prayer flags.

PAINTING School: This School teaches the techniques of traditional paintings. On a visit one can actually see students at work producing intricate design on cloth.

TRADITIONAL Medicine Institute: In Bhutan, equal emphasis is given to both allopathic and traditional medicines. The rich herbal medicines abundant in Kingdom are prepared here. The Institute also imparts the art of herbal medicines to would be practitioners.

HANDICRAFTS Emporium: There are various Handicrafts Emporium in town such as Government owned Emporium and other private Handicrafts, displaying wide assortment of beautifully hand-woven and crafted products.

WEEKEND MARKET: Every Saturday and Sunday most of the Thimphu’s scant population and many valley duelers congregate on the banks of the river where the weekend market is held. It is an interesting place to visit and provides opportunity to mix up with the local people.

TANGO GOEMBA or MONASTERY, the famous Tango monastery in Thimphu derived its name from a deity. The word Tango literally means ‘horse head’. It is derived from the deity Tandin (Hayagriva), which is represented as horse – headed. In 1222, when Phajo Drugom Zhigpo was teaching in Dodeyna, he heard the neighing of a horse from the direction of Tango. On approaching the place, he saw a cliff (behind the monastery) believed to be the body of deity Tandin in flames. The deity appeared before him and prophesied that Phajo would build a meditation centre in Tango and lay foundations for the Drukpa Kagyud school in Bhutan. It’s an hour and half hike (to and fro).  The present building was built in the 15th century by the divine madman “Drukpa Kunley”. In 1616 Shabdrung Nawang Namyal visited Tango Goemba and meditated in a cave nearby. The head lama, a descendent of Lama Drukpa Kunley, presented the Goemba to the Shabdrung, who carved a sandalwood statue of Chenresig, which he installed in the monastery.

CHERI MONASTERY is an hour and half hike (to and fro) Shabdrung Nawang Namgyal built this monastery in 1620 and established the first monk body here. A silver chorten inside the monastery holds the ashes of the Shabdrung’s father